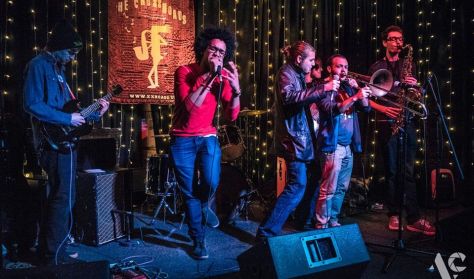 We rap.
We sing.
We make beats.
We play instruments.
We make lots of crazy music videos with our friends.

"Cook Thugless are one of the coolest bands in New Jersey." -Bob Makin,…

We rap.
We sing.
We make beats.
We play instruments.
We make lots of crazy music videos with our friends.

"Cook Thugless are one of the coolest bands in New Jersey." -Bob Makin, My Central Jersey

"If you’ve been out and about near New Jersey’s biggest institution of higher learning in the 2010’s chances are you’ve heard about Cook Thugless.  The seven member ensemble formed in 2013 and has been mixing MC’ing, live instrumentation, a variety of musical influences, striking visuals and a killer live show beyond RU’s borders ever since." -Angelo Gingerelli, The Pop Break

“[Lockjaw] is full of melodic flows and bars you'll be digging from the moment you press play… Trust us, this is one track you'll want to finish out your summer playlist! With the new single also comes the official music video that is just as entertaining as the track… the cinematography is a WIN within itself.” - James Brookes, Gas Mask Magazine

"Songs as concrete-hard as 'Net Worthless' bump up against slow jams like 'All Alone' to create a rap kaleidoscope that no one else is even coming close to." -Brian Erickson, You Don't Know Jersey

"The music video [for Junk Stew] slightly reminds me of Fear and Loathing in Las Vegas with a touch of Quentin Tarentino’s bizarreness. Its theme is a total mindf***.  The group's unique rhyming style might raise an eyebrow (which is a good thing) and lives up to its title as a huge bowl of many inspirations." -Rodney Coursey, Garden State Hip Hop