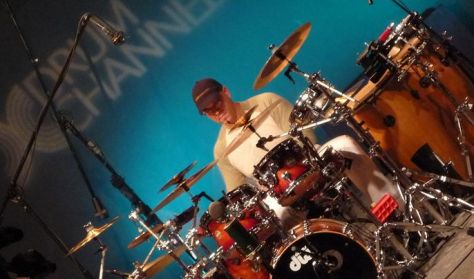 Creator of the mind-blowing "Third Hand" technique, Latin Jazz percussionist Enildo Rasúa is an innovator extraordinaire who’s been performing globally for three decades. Anyone who’s seen him play is an instant fan - a recent clip of Rasúa playing garnered 20,000…

Creator of the mind-blowing "Third Hand" technique, Latin Jazz percussionist Enildo Rasúa is an innovator extraordinaire who’s been performing globally for three decades. Anyone who’s seen him play is an instant fan - a recent clip of Rasúa playing garnered 20,000 FaceBook views in its first week. Grammy award-winning percussionist Alex Acuna (Weather Report, Elvis Presley, Diana Ross, Chick Corea, Whitney Houston, Michael Jackson) calls Rasúa "an incredible gift of music", and (...) he is an innovator (...) I do not hesitate to highlight the superior qualities of Enildo as a musician (...)

Rasúa’s style and sound are unique. Classically trained, he’s a powerhouse of Afro-Cuban soul and Latin groove and yet he has the exquisite, light touch of a classical technician. Growing up in Eastern Cuba to a family of mixed African and Spanish heritage, Rasúa’s childhood was infused with the beats that form modern Salsa music and American soul, blues and rock that flowed on the airwaves. An avid collaborator, Rasúa is a master of Cuban musical traditions, including Son Cubano, Changüí, Salsa, Rumba, Tumba Francesa and Abakuá.

To this mélange, Rasúa adds his cutting edge “Third Hand” technique: he plays drums with THREE sticks, while his feet play additional rhythms, for an astounding SEVEN different rhythms at once. The result is other worldly, leading one French critic to call Rasúa “the alien drummer".

Rasúa’s classical training continued at the prestigious university, Instituto Superior de Arte. Rasúa's passion for Latin Jazz was born when he heard Irakere, the game-changing Afro-Cuban jazz group led by Chucho Valdés, and American jazz trailblazers like Miles Davis, Bill Evans, Weather Report and Yellowjackets. Plus, Rasúa was at the forefront of a new movement - Afro-Cuban Rumba was penetrating pop music for the first time, transforming the face of Cuban music.

Rasúa was thriving – he played 10 hours a day, studying classical, contemporary and Afro-Cuban music by day and playing in orchestras, jazz clubs and Rumba jams by night. Driven to innovate, he began experimenting with THREE sticks, foreshadowing what was to become his famous “Third Hand” technique.

With his formidable training, Rasúa became a dynamic performer, as passionate about rhythms and arrangements as he was with connecting with the audience. He was at once explosive, funky, playful and tender – Rasúa mesmerized audiences and was in high demand in Cuba. He was the drummer for composer/singer Pedro Luis Ferrer and top 80’s pop band, Grupo Montespuma, recording with Pablo Milanés. He toured globally with Montespuma and the Coro Nacional de Cuba. He was the drummer for Nicolas Reynoso's Latin Jazz group and performed with Latin Jazz innovator Bobby Carcacés and Rumba stars Clave y Guaguancó. He played with the legendary Orquesta de Cabaret Tropicana as well as the Orquesta Sinfónica Nacional. As principal percussionist with Orquesta Cubana de Radio y Televisión, Rasúa played in festivals, on radio, TV and film soundtracks, and accompanied music legends such as Omara Portuondo, Ibrahím Ferrer, Elena Burque, Celina González, Michel Legrand and Johnny Mandel.

Rasúa made his US debut in 2013 to rave reviews at New York’s Jazz Standard with a new Enildo Rasua Quartet (Troy Roberts on saxophone, Ben Winkelman on piano, Ricky Rodriguez on bass). Rasúa has performed with Alex Acuña, Giovanni Hidalgo, Meme Solís, Juan-Carlos Formell, Robbie Ameen, Joe Berger and Ritmosis, among others.

He is the drummer for Latin pop band Más Allá, with whom he appeared on Telemundo TV in 2014 and is also a percussionist for the Sanghatierra group. He has performed with his group at RED STEPS in Time Square (2017) in Manhattan, New York and has participated in several jazz festivals.

Rasúa was invited to Los Angeles to perform his "Third Hand" technique on Terry Bozio's show on Drumchannel.com. Bozio, Rasúa and Alex Acuña also thrilled fans with a live jam session. Rasúa was Afro-Cuban music composer for the critically acclaimed Good Bread Alley at the New York Theater Workshop, for which he also appeared on Telemundo TV.

With a devoted fan following around the world, Rasúa is a master of “la calle” who uses his “Third Hand” to bring a completely new twist on Latin Jazz. Whether he's playing solo, swinging with his group, or playing in an ensemble piece, Enildo “The Third Hand” Rasúa will blow you away.