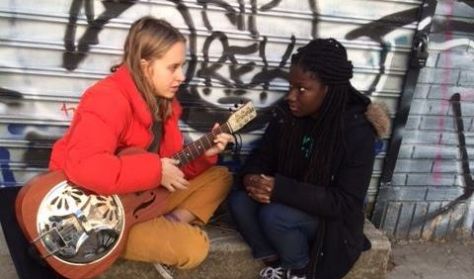 The traditional vocal sounds of Ireland are fused with a modern urban sensibility by Dublin-born and New York-based vocalist Susan McKeown (pronounced "mick-yone"). Accompanied by her band, the Chanting House, McKeown's alto vocals have inspired comparisons to June Tabor, Chrissie Hynde, Sarah McLachlan, Grace Slick, and Sandy Denny. McKeown's musical approach was described by Time magazine as "the kind of music that will link Ireland's musical past with its future."

Since immigrating to the U.S. in 1990 with a scholarship to attend the American Musical and Dramatic Academy in New York City, McKeown has been attracting attention with her dynamic vocals and enthusiastic stage persona.

The Chanting House, which initially focused on an updated version of traditional Irish music when founded by McKeown, Eileen Ivers, and Seamus Egan, increasingly added elements of modern rock after the departures of Ivers and Egan in 1993.

Snakes Although they released a pair of self-produced cassettes, Chanting House Live and Snakes, in the early '90s, McKeown and the Chanting House came into their own with the 1-800-PRIME-CD-released Bones in 1996. McKeown and Chanting House bass/bass clarinet/tin whistle player Lindsey Horner collaborated on an album of seasonal songs, Through the Bitter Frost and Snow, in 1997. McKeown was a featured vocalist in the Obie award-winning musical Peter and Wendy, singing Johnny Cunningham's score at the Geffen Theater in Los Angeles in December 1997 and on the cast album released by Alula. The second McKeown and Chanting House CD, Bushes & Briars, released in 1998, featured musical accompaniment by Celtic musicians Cunningham, Andy Irvine, Jerry O'Sullivan, and former bandmember Egan. Also in 1998, McKeown released Mighty Rain on Depth of Field. In 1999, Mother: Celebration of Mothers & Motherhood, by McKeown, Cathie Ryan, and Robin Spielberg, was issued on North Star, and the McKeown album Lowlands appeared on Green Linnet in fall 2000. McKeown released A Winter Talisman, on which she was joined by Cunningham and Aidan Brennan, on her own Sheila-na-Gig label in 2001; she also self-released Prophecy in 2002. World Village issued Sweet Liberty in 2004 and followed with Blackthorn: Irish Love Songs in 2006.