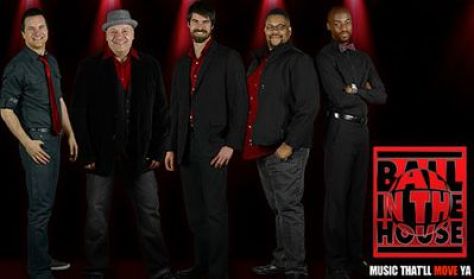 Ball in the House

Performing for over 20 years, average of 150 shows per year

Wrote and performed jingles for Amazon Prime and Cool Whip

Focus on educational outreach, includes choir on stage during concert.

Ball in the House is an R&B/soul/pop a cappella group based out of their hometown of Boston, MA. With their extensive tour schedule (approx 150 shows a year), Ball in the House has performed all over the country at theaters, clubs, schools, and festivals. They have performed with such artists as The Beach Boys, Fantasia, The Jonas Brothers, Gladys Knight, Lionel Richie, Jessica Simpson, Blondie, The Temptations, Smokey Robinson, KC & The Sunshine Band, and numerous others. For six years Ball in the House were the voices behind the Kraft Cool Whip commercials. Ball in the House has appeared on The TODAY Show, America's Got Talent, The Daily Buzz, and the Philadelphia 4th of July Parade. The Boston Globe says of the group, "Ball in the House has everything you would expect to find in a successful pop/R&B band...the one thing it doesn't have is instruments"