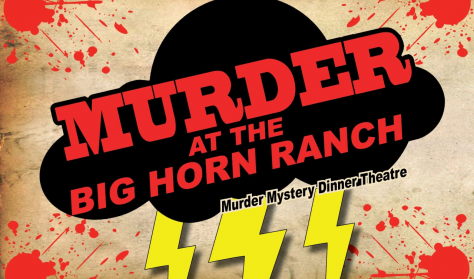 Dick O’Malley and his new wife are spending their honeymoon at the Big Horn Ranch outside of Santa Fe New Mexico.

The year is 1940 and the ranch is just about filled for the weekend. The guest included a famous silent movie star and singer who is spending time at the ranch recovering from a broken leg. A couple who were planning on spending a fun weekend trail riding, and learning about ranch life from the cowboys on the ranch. There are also 3 unexpected guests who had not planned on staying but they had run out of gas just outside of the ranch entrance.

The ranch was fully staffed and even the owners were present when the murder happened. The victim is Jock Peters the manager of the Lodge. He seemed to have some connection to several of the guest and it seems that blackmail is his game, as several of the staff and guests find out. “The Sons of the Big Horn” a singing group from Las Verges are also appearing at the ranch.

The murder takes place at the Big Horn Lodge during a severe thunderstorm. The lights go on and off and when the thunder roars, the lights go out and when they come back on Jock Peters has been stabbed. When Mr. Farmer the owner tried to call the police, he finds that the phone is out of order. Mr. Wayne knows that Dick O’Malley is a famous private investigator, so he asks him to take charge until the police can be contacted.

O’Malley takes charge and after reviewing the suspects he is able to find out who is the murderer. Will you be able to uncover the murderer?