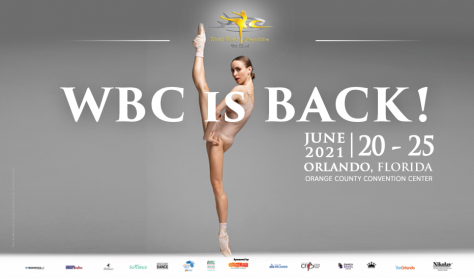 World Ballet Competition is back - and better than ever! Join us for the long-awaited return of the WBC Gala on Friday, June 25 at 7pm at the Orange County Convention Center’s Linda Chapin Theater.  more

The weeklong “Olympics of Dance” opens on Monday June 21 and offers attendees four days of intensely competitive and juried performances. The elite group of ballet dancers, representing 20 countries, will compete for more than $300K in scholarships, cash prizes and contract offers from dance companies around the world. Now in its 14th year, the World Ballet Competition continues to attract leading celebrities from the global dance industry while furthering the careers of future artistic talent worldwide.The event culminates with a star-studded Gala finale on Friday, June 25 that Matt Palm of the Orlando Sentinel, named “A steady stream of wow-wow-wow.”

Don’t miss performances from this impressive roster of stage and film:

Adiarys Almeida- An international guest artist from Matanzas, Cuba, Almeida is a former Principal Dancer of Cincinnati Ballet and Corella Ballet and has been described by The New York Times as “[making] technical feats look like the purest and most honest ballet dancing.”

Taras Domitro - An international guest artist born in Havana, Cuba, Domitro trained at Alejo Carpentier School and National Ballet School of Cuba and was the second male dancer to win the Professional Gold Medal in the World Ballet Competition.

Mayara Pineiro - A Principal Dancer of Pennsylvania Ballet, Pineiro graduated from the prestigious Cuban National Ballet School under the direction of Ramona de Sáa, Pineiro’s courageous journey from Cuba to the U.S. was featured in the documentary Secundaria by filmmaker Mary Jane Doherty.

Etienne Diaz - A graduate of the Orlando Ballet School, Diaz was a finalist in YAGP New York and has made guest appearances in various productions and Galas across the United States. He has danced principal roles in George Balanchine’s The Prodigal Son, Tarantella, The Four Temperaments, The Nutcracker (Cavalier), and Ben Stevenson’s Cinderella.

Taylor Sambola - A former student of The School of American Ballet, American Ballet Theatre New York, and Houston Ballet, Sambola made her TV debut with the Rock School Dance Project on America’s Got Talent passing through to Las Vegas.

Arcadian Broad - A dancer since age nine and finalist for the title role of Billy in the Broadway Musical Billy Elliot, Broad was also a semi-finalist on NBC’s America’s Got Talent and a featured guest on The Ellen Show.

Daniel Ulbricht - a Principal Dancer with New York City Ballet, Ulbricht trained at Judith Lee Johnson Studio of Dance, Les Jeunes Danseurs and the School of American Ballet. He is the founder and director of Stars of the American Ballet and hosted a virtual ballet technique WBC MasterClass during the Covid pandemic, attended by dancers from 14 countries around the world including Argentina, Romania, Australia, Malaysia, France and the U.S.

Denys Drozdyuk - A graduate of the world famous Juilliard School in New York, Drozdyuk is a three-time World Ten Dance champion, has been featured on NBC’s World of Dance and a former winner of So You Think You Can Dance Canada.

Sebastian Villarini - A NYC ballet soloist, Villarini trained at the School for Performing Arts in Puerto Rico and the Pacific Northwest Ballet. He was also the recipient of the prestigious Lincoln Center Emerging Artist Award and Puerto Rican Heritage Award.